"I'm all about the family budget, and being frugal, and not wasting money when you can put it to better use somewhere else. I realize that a tip is not a specifically agreed upon amount; it's a zero sum transaction where every dollar you choose to leave is a dollar the waiter gets and you don't have anymore. But here's the thing: Don't be a cheap bastard."


You've had a good week, the kids did well in school, and you want to take the family out to dinner. You know the budget's tight, but you decide it's worth it, so you load everybody in the car and head out to Applebees. 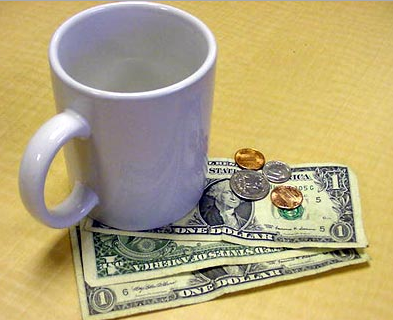 
Before you even get to the restaurant, you know you're conservatively going to spend $10 per person on food, $1.50 per person on drinks, and add in about 8-10% for tax. That puts you at about $50 for your family of four. And then comes the big question:

How much should you tip?

Before we answer that question, let's talk for a minute about the whole restaurant process in America. We have an unspoken and unwritten agreement with the restaurants regarding our meal:

The part about the tip being unspecified and not pre-agreed to is important. You can walk out of the restaurant without leaving any tip at all, and no one will call the police. Conversely, you can leave $1,000 for the waiter, and he won't have any obligation to chase you out to the parking lot and tell you that you left too much.

The part about the waiters' job being to help facilitate your enjoyable dining experience is also important. We've all had waiters who are extremely friendly, attentive, and helpful. We've also had waiters who are not-so-friendly, forgetful, or who downright ignore you. And of course there's everything in-between. I don't believe they all deserve the same amount of a tip, and I'm happy to leave more for a good waiter and less for a bad waiter.

But that still doesn't tell me how much I should leave...

15% is a generally accepted rule of thumb guideline - if you leave 15% your waiter won't be overly excited, but he neither will he call you names behind your back after you leave. I know people who routinely tip 20-25% (which seems very generous), and I've seen people leave 10% even after excellent service (which felt embarrassingly low).

I don't think there's anything wrong with starting out at 15%, and then sliding up or down a little bit from there depending on the waiter's performance.


Regarding tipping in general:

I'm all about the family budget, and being frugal, and not wasting money when you can put it to better use somewhere else. I realize that a tip is not a specifically agreed upon amount; it's a zero sum transaction where every dollar you choose to leave is a dollar the waiter gets and you don't have anymore. But here's the thing: Don't be a cheap bastard.

$2.50 should not be a lot of money to you. Yes, I understand you're watching every dollar, and that a dollar here and a dollar there adds up to whether or not you're under budget this month.

However, you're the one who chose to go out to a restaurant in the first place. If the difference between $57.50 and $60 is a deal-breaker, maybe you shouldn't have gone out to eat, or you could have gone to a less expensive restaurant.

Waiters rely on tips as the primary source of their income, so when you stiff the tip, you're really asking forcing your waiter to work for a reduced wage. (Do you ever offer your boss a chance to pay you less?) And that $2.50 - while it isn't a lot for each individual family, it can add up to $25 or more for the waiter over the course of the night, if everyone used the same sliding scale. This would allow the good waiters to consistently earn a better living.

Budget for the tip as part of your meal, and be generous with those who treat your family well. Using the tip as a place to save money is just wrong - it's the difference between frugal and being cheap. And if karma has any say, it'll probably come back to bite you in the butt.

I also write about

Get new posts delivered to your inbox